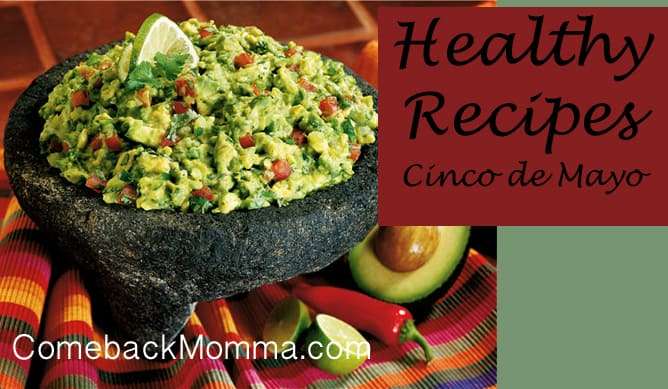 In fact, Cinco de Mayo is a homegrown holiday, as American as apple pie. Even though the date commemorates Mexico’s victory over France in the Battle of Puebla, Cinco de Mayo was first celebrated on American soil. Mexican-American communities in California and the West organized the first Cinco de Mayo parades, dances, and banquets during the American Civil War. You can read the whole fascinating story here.

Today, Cinco de Mayo is observed throughout the United States and other countries on May 5th as a celebration of Mexican heritage and culture, especially through music, food and drinks! Those festivities often feature tequila and beer, fried foods, and piles of melted cheese…all of which is much more Tex-Mex, than authentically Mexican. But, you can indulge in the fun without defeating your diet and fitness goals by choosing healthier Latin-inspired foods. Here are 20 simple healthy recipe ideas for everything you need to throw your own healthy fiesta—and they’re all under 200 calories!

Baked Tortilla Chips or Tostadas
Brush two corn tortillas lightly with olive oil. Slice into wedges and arrange on a baking sheet. Sprinkle with sea salt and a squeeze of lime juice. Bake until crisp, watching carefully so they don’t burn. For a tostada shell, leave the tortilla whole.

Fresh Salsa
This salsa is called salsa bandera (or flag salsa) because it has all of the colors of the Mexican flag. Jarred salsa just cannot compete! It’s easy to make your own in minutes. Dice 2 tomatoes, ½ onion, ¼ cup cilantro, jalapeno to taste, put all of this in a bowl, then squeeze the juice of one lime over the top and stir.

Faux Guacamole
If you love guacamole, but find it hard not to eat the whole bowl, try this adapted version that has only 135 calories and tastes surprisingly like the real thing. Mix together ¼ chopped avocado, 1/3 cup lowfat cottage cheese and 3 Tbsp. fire-roasted salsa. Serve with baked tortilla chips.

Guacamole Bites
These make great appetizers. Remove the stems from large cherry tomatoes, then turn them over and slice just enough off of the bottom so the tomato will stand upright. Use a paring knife to hollow out the stem end. Next, mash avocado with lemon juice and sea salt, and stuff a small amount into each tomato. Each “bite” has only 10 calories!

Spicy Chickpeas
When it’s the salty crunch of tortilla chips you crave, reach for these baked garbanzo beans (chickpeas) doused in fiery spices. Rinse canned garbanzo beans and let them drain well in a colander for several minutes. Toss the beans in a small bowl with 1 tsp. olive oil, cayenne pepper, garlic powder, ground cumin, and add sea salt to taste. Bake on a foil-lined sheet for 40-45 minutes at 400° F, stirring every 10 minutes.

Ceviche
If you’re not already a ceviche lover, this recipe will convert you. Ceviche is seafood that has been “cooked” in citric acid. Start with very fresh skinless, boneless white fish or peeled shrimp, cut into small cubes. Mix in a bowl with fresh lime juice (use about ½ cup per pound of seafood). Refrigerate, stirring occasionally, for 15-30 minutes. When the fish is opaque, it is ready. Some people like to marinate ceviche even longer, for a more well done texture—it’s up to you. Add diced onion tomato, chilies, cilantro, avocado or mango if desired. Serve on a tostada or in lettuce cups.

Roasted Stuffed Jalapenos
Jalapeno poppers don’t have to be fried and filled with cheese to be delicious. Slice 6 jalapenos in half lengthwise, and remove the seeds. Cook ½ lb. ground turkey seasoned with a dash of sea salt, ground black pepper, and ground cumin, to taste. Fill each jalapeno with 1-2 Tbsp. of turkey. Top evenly with ¼ cup shredded cheese. Roast in a 375° F oven for 15-20 minutes. Each jalapeno half has 40 calories and 4g protein.

Mexican Corn on the Cob
This flavorful corn on the cob is a favorite Mexican street food. Shuck an ear of corn, spray it with cooking oil, and roast it in at 375° F until the kernels begin to brown, about 15 minutes. Mix 1 tsp. mayonnaise with ½ tsp. lime juice and a dash of sea salt. “Paint” this sauce on the corn with a spoon or brush. Sprinkle with ancho chile powder and lime zest.

Homemade “Refried” Beans
These are so much tastier than the mushy canned version. Sauté ¼ chopped onion and ½ chopped green bell pepper or jalapeno in a pan sprayed with cooking oil. When onions begin to brown, add a can of pinto beans and crush with a potato masher, adding water or milk until they have the texture you like. Squeeze a lime into the mixture for extra zing.

Tostada
Tostadas have a satisfying crunch and can be topped with any number of healthy ingredients. Follow the instructions above for making a tostada. Top with ¼ cup homemade “refried” beans or other canned beans, shredded lettuce or cabbage, tomatoes, salsa, and a spoonful of plain yogurt. Don’t forget the hot sauce!

Papas con Rajas
Roasted peppers add amazing smoky flavor, and a little heat, to mashed potatoes. Using tongs, hold a poblano pepper over the open flame of a gas burner (or roast in an oven) until all of the skin is charred. Place in a closed paper or plastic bag for 5 minutes to steam. Scrape off the charred skin with a knife, remove seeds, and slice into thin strips. Stir into prepared mashed potatoes.

Margarita Chicken
Get festive with tequila, without the embarrassing side effects! Make a marinade from 1 oz. of tequila, ½ cup orange juice, one squeezed lime, ¼ chopped onion, 1 clove finely chopped garlic. Add sea salt and cayenne pepper to taste. Marinate 4 chicken breasts in the marinade for 4 hours or overnight. Grill for 5-7 minutes per side.

Calabacitas con Elote (Zucchini and Corn Sauté)
Squash and corn are an important part of the Latin American diet, and they taste great together! Sauté ½ chopped onion in 1 tsp. olive oil until browned. Add ½ cup frozen corn, a whole chopped zucchini and chopped tomato. Season with sea salt, ground black pepper, and dried oregano and cook until zucchini is done to your liking. If you want to turn up the heat, add chopped jalapeño or canned diced green chilies.

Cinnamon Crisps
These sweet and crunchy treats taste like churros. Brush a whole grain tortilla with olive oil, slice, and arrange on a baking sheet. Sprinkle lightly with cinnamon and sugar. Bake at 375° F until crisp.

Xangos
Usually, deep-fried, this version of a Baja California dessert (pronounced ZAYN-go) is baked. Spread 1 Tbsp. of cream cheese in a line down the center of a whole grain tortilla. Top cheese with half a sliced banana. Roll up tortilla and secure with toothpicks. Spray lightly with cooking oil. Sprinkle with cinnamon and sugar and bake at 375° F until tortilla is crisp. Slice in half, makes two servings.

Michelada Cocktail
This refreshing Mexican cocktail has only 100 calories! Mix one bottle of Mexican beer, the juice of 2 limes, and 1 tsp. hot sauce (like Tabasco). Serve over ice, in two glasses.

Skinny Margarita
If you’re going to enjoy a margarita, this is our favorite. It has a bright flavor and is also light on calories just 140 Combine 1.5 oz. of silver tequila, 1 oz. fresh lime juice, 1 oz. fresh orange juice, and 1 tsp. agave nectar in a shaker. Shake and serve over ice and garnish with a slice of orange or lime.