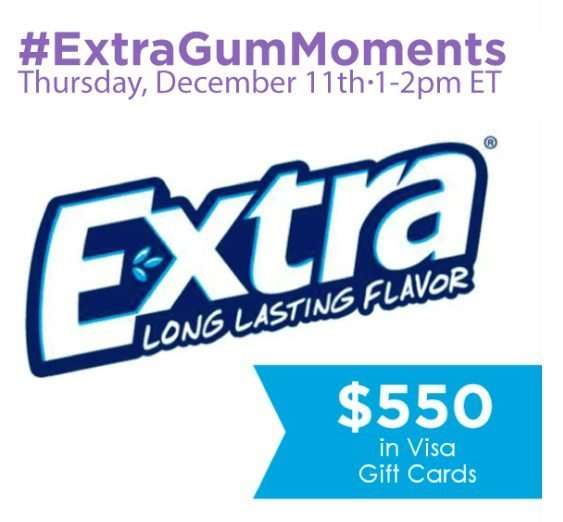 Do you love a good Twitter Party?  You know we do and we’re excited to host a party about meaningful giving with Extra® Gum!  On Thursday, December 11 at 1:00 pm ET , please join me for the #ExtraGumMoments Twitter Party where we’ll chat about how we can give a little EXTRA and give you a chance to win prizes!

Start thinking about the wonder people you want to give a little something extra too. My kids and I are working on a gift basket for my husband. He’s really gone above and beyond the call of duty this year in so many ways. We’ll be including Extra® Gum and a few other gifts to show him that he is so EXTRA special to us! How will you make someone feel extra special this holiday season. Consider including a gift with Extra® Gum? You can get some great ideas by checking out the Extra® Gum Pinterest Page. I can’t wait to party with you at the #ExtraGumMoments Twitter Party on December 11. You’ll have a great chance to be one of the eight prize winners. RSVP today!

Join me and RSVP for the #ExtraGumMoments Twitter Party on SoFabChats!

TIP: Special deals and brand coupons? Keep that options checked when you RSVP for the party!