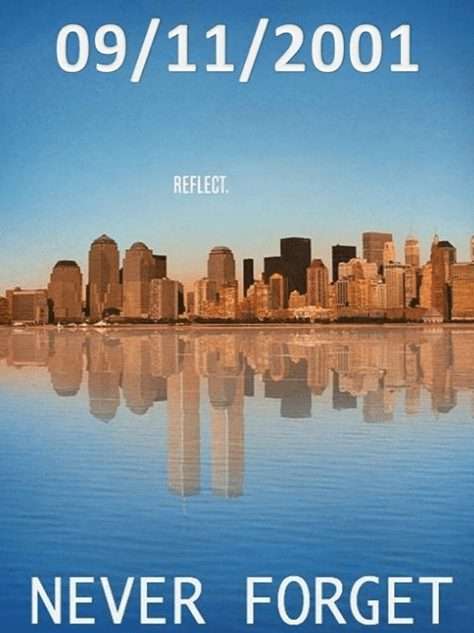 My friend Wendy over at Weight’s Over shared what she remembers about 9/11. I thought I would follow suit. Here is what I remember:

I was living in Seattle at the time. My husband was on a business trip in California. I remember turning on the TV and thinking on was on a Sci-fi channel. When I realized it was on all channels I could not believe it was really happening live. I called my husband who was also sitting in front of his TV in disbelief. I was shaking. I was crying. I was in utter shock. Thank goodness his business colleagues kept their rental car so they could get home to their loved ones.

I remember hearing that my brother could see it all unfold out his Manhattan window. I later heard that my cousin had just come up from the New Jersey train when one of the planes hit. I remember hearing about a friend running toward the horror to see if his wife was safe, luckily she was. I remember being super worried about my uncle and 3 cousins who are all firefighters and praying they were all OK.

I remember wishing that I was back with my family in New York. I remember my visits to the top of the World Trade Center as a kid. I had been there multiple times, even before going to The Statue of Liberty or the Empire State Building. There was something about those towers that were just mesmerizing. They symbolized New York City for nearly my entire childhood. The first tower opened when I was only 2. My father was a New York Police Officer so I spent a lot of time downtown. We loved trips to SoHo where I could often get glimpses of the towers as we drove around town. I remember taking the Staten Island Ferry to look at the towers. I remember taking it again and looking at the void when they were no longer there.

There are so many children and even teens today that have no idea what really happened. Make sure they know. We don’t want to scare them, but they also need to know that these things are possible and to never be afraid to speak up if they seem something strange.

Blessings to all on this historic day.

What do you remember?