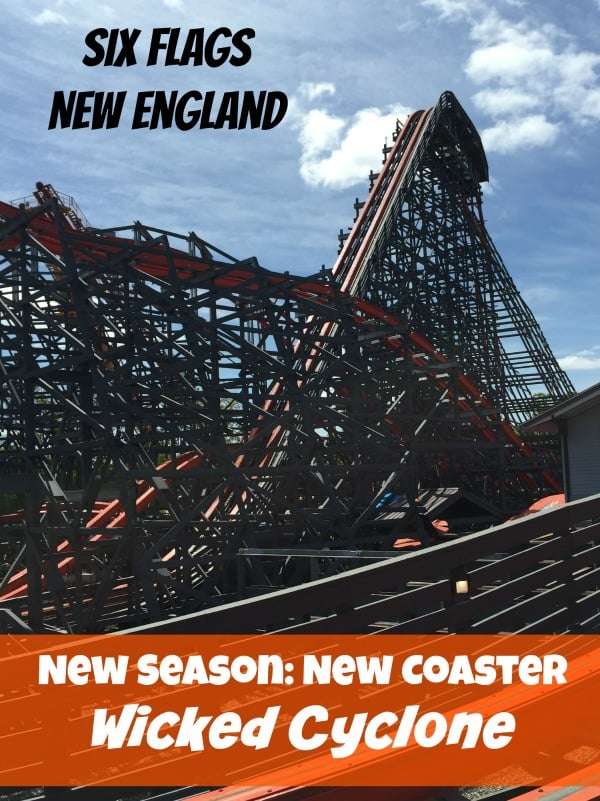 I am a HUGE fan of roller coasters so I was beyond thrilled to be invited to try the new coaster at Six Flags New England, the Wicked Cyclone. This coaster is actually a hybrid using much of the frame of the retired wooden Cyclone coaster with the addition of steel tracks and great new design features. If you are a coaster enthusiast, I highly recommend this coaster.

I arrived on a chilly New England morning to give the Wicked Cyclone a try. I also had the chance to meet with Reed Timmer, celebrity spokesperson who helped kick off the event. Reed Timmer, famous storm chaser, was the perfect man to lead the way into the path of this new “storm.” I had the pleasure of meeting Reed for an interview as well. He is a super nice guy and not caught up in his “fame” at all. He was guided through a whirlwind of TV interviews, so I think he found it refreshing that I just wanted to chat and take notes the old fashioned way. Reed is famous for driving right into the path of tornadoes. He says his first trip on the Wicked Cyclone was more frightening than storm chasing. Wow! I’d ride the coaster ANY DAY before taking on the real thing. A few other highlights from my chat with Reed:

The theme of the ride encourages park goers to become storm chasers helping to track the latest cyclone about to hit the area. The stage is set during the walk in to coaster with a storm chaser van, a crashed plane, beached boat and more. The screens along the entry path are emergency weather reports about the impending storm. It’s a really fun interactive experience, especially if you are stuck waiting on a long line. 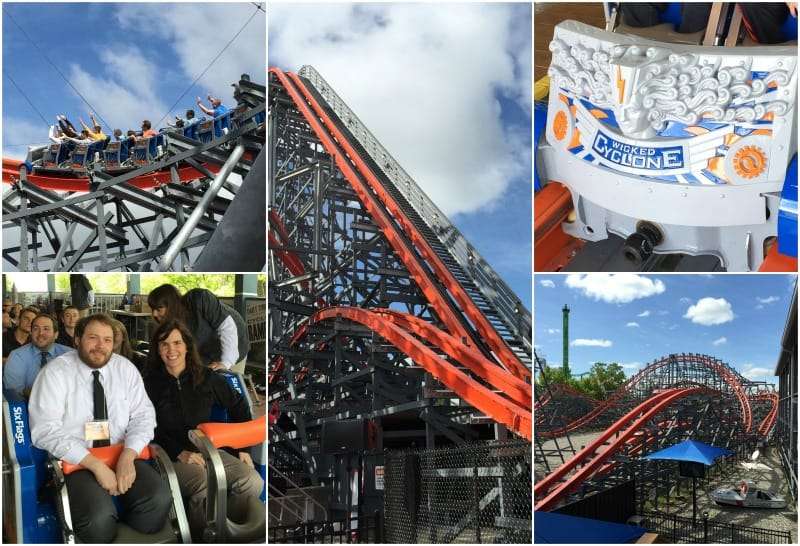 Most of the early riders were from A.C.E (American Coaster Enthusiasts). When I first boarded the Wicked Cyclone, I sat next to a guy who had already taken the ride 15 times. There was an 8-year-old girl that rode 18 times, half in the front row. My daughter was very jealous because she was stuck in school. Many of the ACE members said that the Wicked Cyclone definitely made their Top 10 lists. I agree as well. I’m trying out the front row above. Below I’m in the third row behind a DJ PEREZ from WKCI-FM and iHeart Radio. Thanks to him for sharing this video. See me waving?

The Wicked Coaster is truly like no other coaster I have ever experienced. It’s one of only 5 wood/steel hybrid coasters in the world. While the coaster seems small and the initial drop is less than 150 feet, don’t let that fool you. Top speeds are an impressive 55 miles an hour and the barrel roles are fantastic. They really catch you buy surprise throughout the ride and are enclosed by the coaster frame making you feel like you might actually crash. I rode 5 times trying different sections of the coaster. Many coaster enthusiasts prefer the extra “air time” you get toward the back of the train, but I liked the front best.

In addition to the Wicked Cyclone, Six Flags New England has many premiere rides and coasters. Bizarro is another one of my favorite coasters in the country. Get the scoop on all things Six Flags at their website. #ThrillItup!