As some you know, I have been following the new Weight Watchers 360 plan for the past three months. Month number one went really well. I used the online tools to keep me on track with my eating and exercise. Month two was not so good. It seemed a bit too easy to stop tracking with no one holding me accountable. 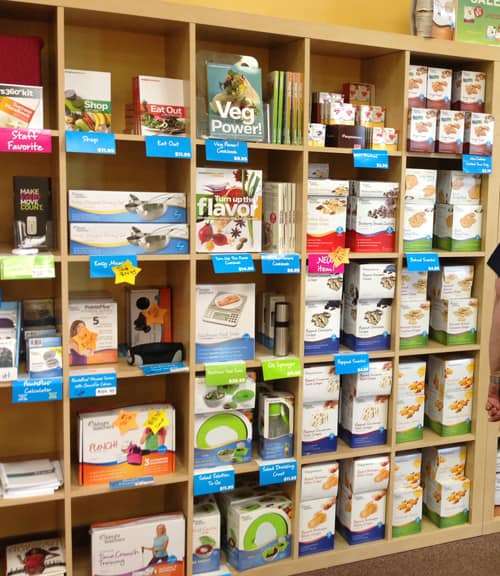 Lots to Buy at the Weight Watchers Store

For month three, I decide to try something different and actually go to a meeting. I must admit that I was a bit concerned that there might be a bunch of “blue-haired-old-ladies” at a midday meeting, but this was far from the case. The meeting participants were mostly women, I think there was one man, but they ages ranged from late thirties to up to about 70ish. At 10 on a Friday, this was a popular session with some 35+ people in attendance.

I know I don’t have a lot of weight to lose so I was also concerned about being judged for being “too skinny” to be at a meeting. This was also not the case. I felt very welcomed by the group and the meeting leader.

When you attend meetings, you are given a book to track your weight, notes, etc. There is a page for “bonus” stars that the leader gives out as little kudos for small successes like avoiding the ice cream at home or opting for something healthy when friends were making unhealthy choices at a restaurant. I got a sticker for announcing that this was my first Weight Watchers meeting ever. I felt like a kid in first grade with my little accomplishment chart, but it also felt nice to be recognized. I’m sure looking at the page as it slowly fills up with bonus stickers will feel good. 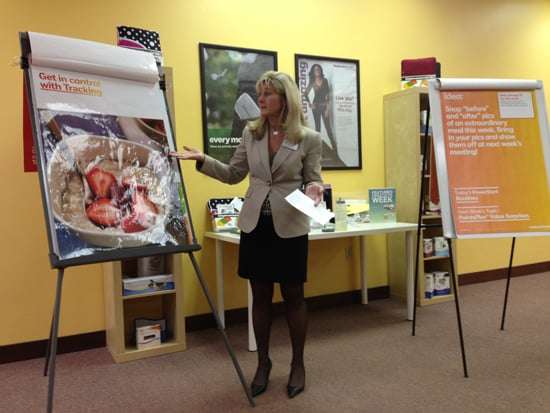 Anyway, when you attend your first two regular meetings, Weight Watchers also recommends that you stay for two Power Start Meetings. These meetings alternate each week. They are the heart of the 360 plan because they focus on places and routines and not just food. The “spaces” meeting suggests you make changes in your daily surroundings that can make you healthier. For example, I could sit on an exercise ball instead of a chair while writing. I have yet to try this, but I keep meaning too.

For routines, the goal is to figure out what you can change in your daily routine to keep on track. According to Weight Watchers the main focus for routines is to know what you are going to have for lunch. I think this is the meal that many people tend to “fly by the seat of their pants” and make unhealthy choices. I did find it a bit strange that this was the only focus for the “routines” meeting, but th exercise was interesting. We talked about how to build a healthier sandwich. Using the Weight Watchers point system, we took a typical 20 point sandwich down to more like 8-10 points.

Since I am a newbie, not that many people stayed for these sessions. There were only 4 of us each time. It was nice so I had the opportunity to ask the leader more questions. I think all leaders bring a success story with them. Our leader (let’s call her Jane), took three times to finally get on track and lose over 80 pounds and has kept it off for 3 years. She was extremely genuine and charismatic  I hear that is one reason why here meetings are more crowded.

Going to meetings really helped me to feel better supported and to not feel alone in my struggle. Again, I realize I do not have much to lose, but my main issue is my relationship with food. I am an emotional eater and a bit of a yo-yo dieter. Weight Watchers is helping me conquer these issues and it’s really nice to listen to others at meetings who are going through the same things.

I was given three months of the Weight Watchers 360 Online Membership for free. I decided to pay for the meetings membership myself. All opinions expressed in this post are my own.

Have you tried Weight Watchers lately? If not, you might want to give it a try.