Wyoming national parks and monuments are some of the most beautiful in all of North America. With stunning views, majestic mountains, dense woodlands, and historical sites all around the state, it’s no wonder that droves of nature and history lovers flock to the state every year. 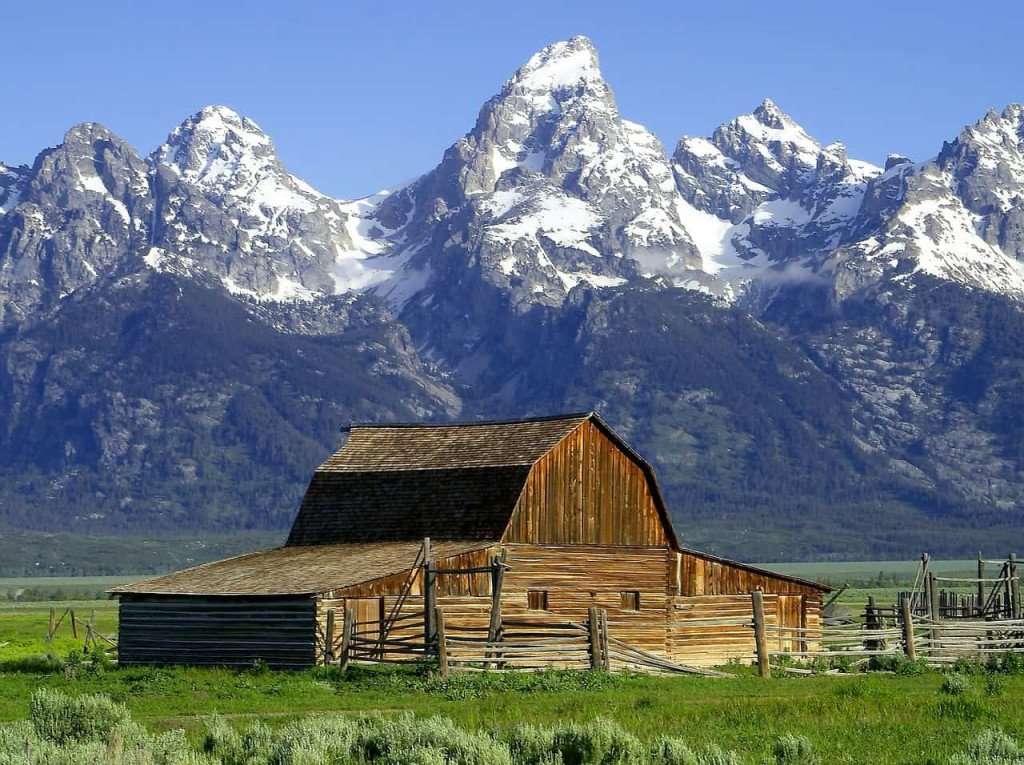 Wyoming boasts a whopping six national parks. These parks feature a variety of terrain from sweeping vistas to gigantic rock formations, as well as rich historical history. Some will be immediately recognizable to you, while others may never have been on your radar. All of them offer a unique view of the natural beauty and history of Wyoming.

Encompassing over 2.2 million acres and shared by three states, Wyoming, Montana, and Idaho, this massive national park attracts around 4.2 million tourists every year. These visitors enjoy a wide variety of outdoor activities such as hiking, fishing, boating, sightseeing, and camping.

Although rich in wildlife and geological beauty, Yellowstone is best known for its geysers, the most famous being Old Faithful. In fact, this world-famous geyser is the highlight of most trips to the park. Yellowstone falls is another landmark not to be missed.

Everyone knows that Yellowstone is chock full of natural beauty, but what many don’t realize is that it also has several historical landmarks, as well. 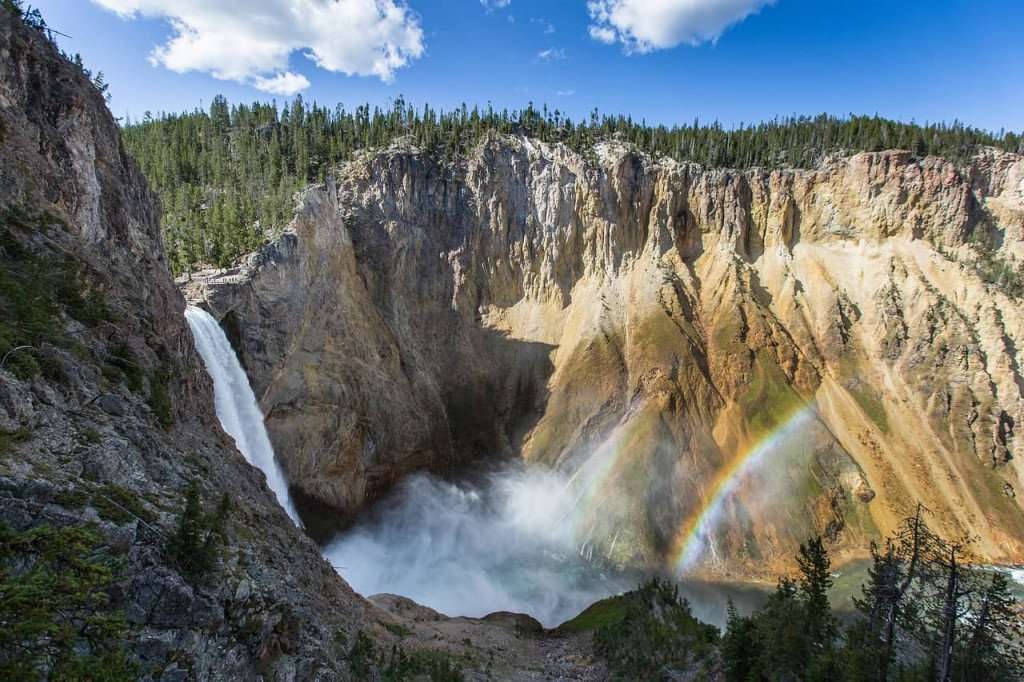 Built in 1904 and considered to be the largest log structure in the world, Old Faithful Inn has been attracting visitors for generations. The brainchild of architect Robert Reamer, this massive structure seems to grow right out of the landscape. It’s widely considered to be a revolution in national park architecture.

This hotel celebrated its 125th anniversary in 2016. In 2014, it was fully renovated, restoring it to its original Colonial Revival splendor for everyone to enjoy. The hotel is situated on the shores of one of the largest alpine lakes in the world and boasts views of Lake Yellowstone as well as the area’s abundant wildlife.

This towering natural historical landmark seems to reach the sky above the Grand Loop Road. Comprised entirely of obsidian rock, or volcanic glass, the impressive columns that reflect the light so spectacularly were formed as thick lava cooled and crystallized.

Designed by architect Herbert Maier in what has become known as National Park Rustic style, these trail-side museums offer greater insight into the park. The Norris Museum has exhibits on geothermal geology, Norris Geyser Basin, and life in thermal areas, while the Madison and Fishing Bridge museums are used as small visitor centers.

Filled with historical buildings like the Captain’s Headquarters, Guard House, Hospital Annex, Commissary, and more, Fort Yellowstone harkens back to the days when the US Army was responsible for the management of Yellowstone.

Centered around its namesake, the Grand Teton, the tallest mountain in the Tetons Range, this park encompasses 310,000 acres. Often called The Mountains of Imagination, the area features forest-lined mountainsides, wildflower-covered meadows, crystalline lakes, and the Snake River. 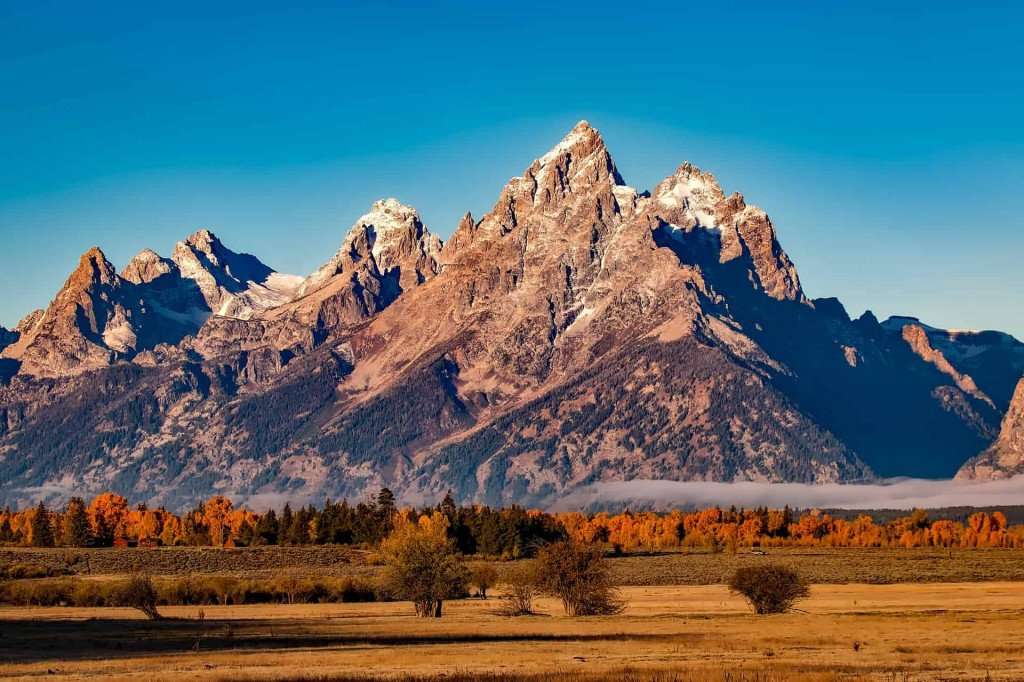 Murie Ranch, located on the Snake River, was the birthplace of The Wilderness Act and the modern conservation movement. Visitors can tour the cabins, rive, and woods of the area.

Part of the famous Jackson Hole resort, Jackson Lake Lodge is situated on a high terrace overlooking Jackson Lake. Completed in 1955 for John D. Rockefeller Jr., this lodge boasts 60-foot panoramic windows designed to capture every last bit of the amazing views of the area.

Offering some of the best outdoor activities in the country, Jackson Hole is one of the best spots in Grand Teton National park for hiking, biking, skiing, and more.

The USA’s first national monument, Devils Tower is a flat-topped volcanic formation towering 1,200 feet into the air. Visitors from all over the world flock to see the tower itself, as well as to enjoy the eight miles of nature trails surrounding it. Some even climb Devils Tower itself.

At over 7,500 feet above sea level, Fossil Butte offers a look 52 million years into the past. Teeming with fossils known worldwide for their diversity and preservation, the area offers a rich educational opportunity for visitors.

In addition to a peek into the prehistoric past, visitors can enjoy scenic drives, hiking, picnics, and more.

What began as a small 100 foot by 80-foot structure ballooned in size and importance, eventually becoming a military post from which several treaties were negotiated and major military campaigns were launched. Visitors to the fort can learn all about life during America’s western expansion.

Wyoming National Parks and monuments aren’t the only draws for visitors. These historic trails offer a mix of history and nature, giving visitors a glimpse into the past as well as wonderful, natural views. 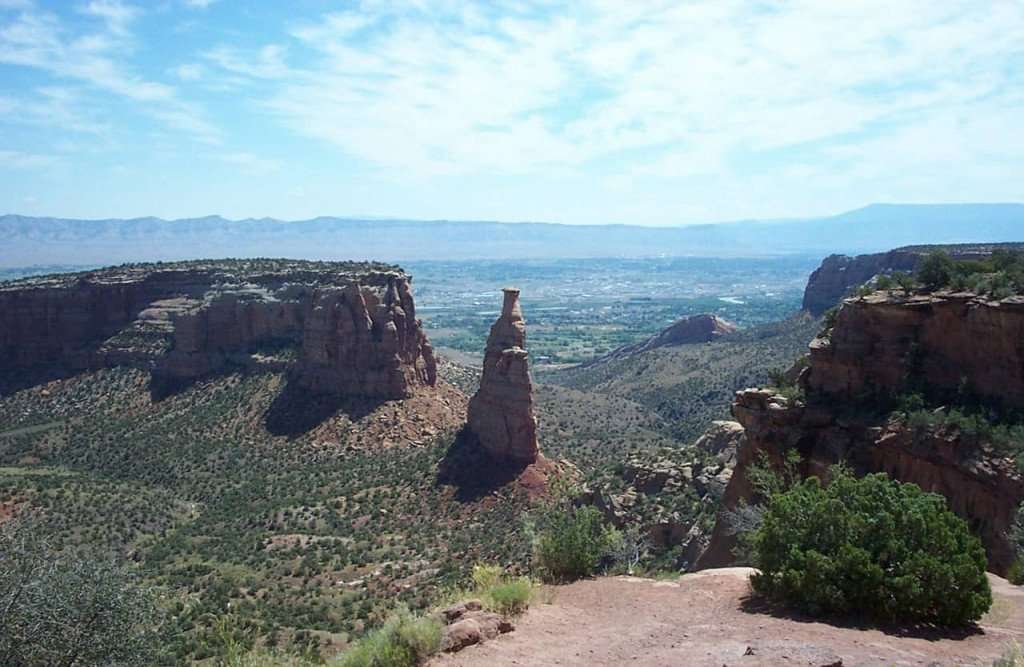 Known as the Register of the Desert, this rock was an important landmark for pioneers. Its name comes from a pioneer legend that said travelers needed to reach the rock by Independence Day if they wanted to cross the Rockies before winter. Over the years, many travelers inscribed their names on the 128-foot rock’s surface as they made their way along the California, Oregon, and Mormon Pioneer trails.

Perhaps one of the most iconic institutions of the old west, the Pony Express trail is still around for visitors to explore. This historic route wound from St. Joseph, Missouri, across the Great Plains, over the Rockies and the Sierra Nevada to Sacramento. Today, visitors can learn about the trail at the National Historic Trails Interpretive Center in Casper, Wyoming.

Now known as Warren Air Force Base, Fort D.A. Russell began as a cavalry post. It was established in 1867 to protect workers building the Union Pacific Railroad and is one of the Air Force’s oldest continuously active bases.

Public access is limited, but the fort offers home tours and military reenactments for three days during July.

Built in 1887, the depot helped make Cheyenne a cultural and economic force in the old west. Today, it houses the Cheyenne Depot Museum, which offers visitors an extensive collection of photos, artifacts, and exhibits which document the railroad’s history and westward expansion. 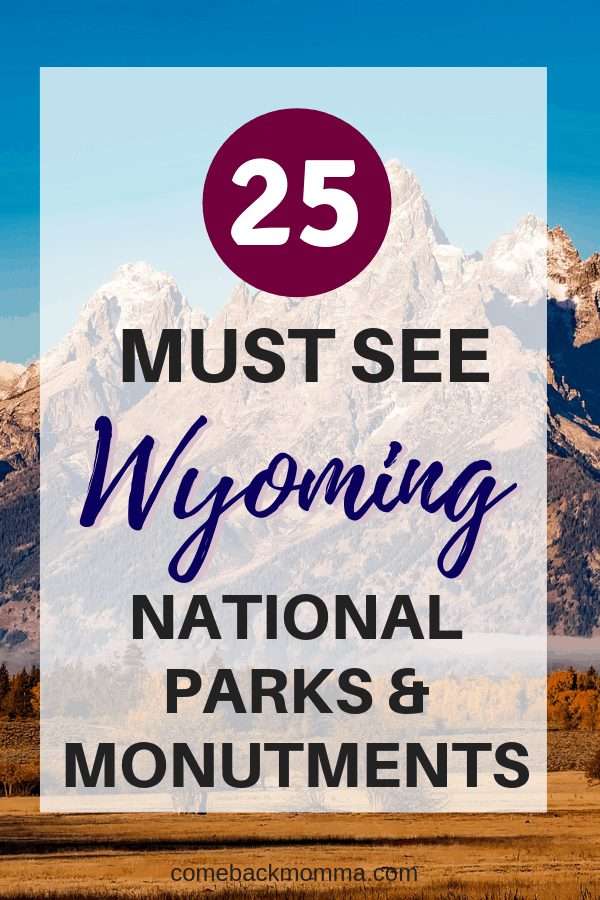 Known as the American Stonehenge, the site has been an important cultural and spiritual site for Native Americans for thousands of years. This 75-foot diameter stone wheel is the best preserved of its kind in North America and includes 28 spokes – one for each day of the lunar cycle. Visitor hiking the 1.5-mile trail will enjoy beautiful views of the entire Big Horn Basin.

Built in 1893, the historic Sheridan Inn was considered the finest hotel between Chicago and San Francisco at the time. Buffalo Bill Cody was the hotel’s most famous guests, and today each of the hotel’s 22 rooms features a character from Buffalo Bill’s life.

From 1868 to 1869, miners were drawn to the pass in droves by the promise of gold only to be crushed by the backbreaking work and severe conditions of the Southern Pass.

Today, South Pass is one of the most well-preserved mining towns in the west featuring 17 historical buildings. Visitors can enjoy a three-mile trail, the historical architecture as well as an interpretive center featuring gold mining methods.

This historic fort was attacked by native American tribes in 1866, leaving more than 80 men dead. Today, the partially restored fort boasts 1,000 acres with three major locations narrating the dramatic story of the conflict as well as Native American and soldier life.

The associated battlefields, Fetterman Fight and Wagon Box Fight, located nearby include a trail that leads visitors through the battle, providing both Native American and settler perspectives on the battle.

The oldest ranger station in the United State, Wapiti has been in continuous use since it was constructed in 1903. Located in Shoshone National Forest, visitors to the area can enjoy camping at one of the 41 sites in the area from mid-May through mid-November.

Wyoming National Parks aren’t the only things to enjoy in the state for nature and history lovers. In addition to Wyoming national parks, the state offers a plethora of monuments, historical sites, and outdoor activities at many of these locations.

If you love nature and history, you owe it to yourself to explore Wyoming National Parks, monuments, and all the beauty and history of the surrounding areas.

Wondering what to wear for summer travel in Wyoming?
Check out these awesome travel clothes for women.