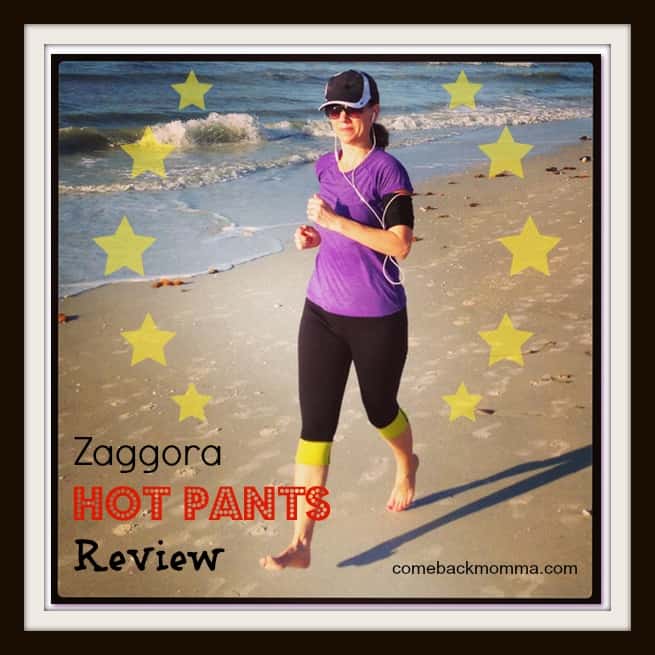 Update: I’m reviewing the Zaggora 2.0 Hot Pants too. Check out this review here.

I’m sure you have heard about them by now. Zaggora Women’s Hotpants

are a HOT item in the press. After seeing the product on Good Morning America, I reached out to Zaggora to see if I might try a pair. I asked for a black pair as I can’t imagine wearing a bright color pant meant to promote sweat. Below the belt sweat stains are not pretty. The marketing materials from Zaggora state (I am summarizing):

During exercise
Studies confirm that exercising in Zaggora Hotwear can increase calorie burn between 6-18% more than traditional exercise clothing depending on fitness level.
After exercise
Study found that if Zaggora HotPants are worn in resting recovery after 30 minutes of exercise, they can lead to a 12.5% increase in energy expenditure in the 30-60 minutes after exercise.

When my Zaggora Hot Pants arrived, I was a bit surprised at how thick the material was. They are similar to that of a wet suit. Initially I thought, “these cannot be comfortable!” Initially, they did feel a bit strange. You have to tug a bit to get them on. Once they were on though, they felt better. Walking around there was a slight “swishing” sound as my thighs rubbed together. I was a bit embarrassed to be too noisy at the gym, but I went anyway.

I took a boot camp class. As I kept moving, the more comfortable the the pants became. After a while, I no longer noticed the pants feeling any different than my other workout pants. Although the material is thick, I did not feel restricted in my movement at all. I think keeping my muscles nice a warm was a good thing on a chilly New England morning. This gym is not heated very well in winter.

After class, I peeled off the pants to see, and feel, the results. I really did need to “peel” them off since my legs were drenched in sweat. It was a bit of a strange feeling, but also kind of cool as I felt like I had really melted fat off my legs. Now I realize that I did not melt anything in one workout, but my legs actually did feel a bit more taught (I suppose from sweating out any excess water). Feeling that wear #1 was a success, I wore my Zaggora Hot Pants for 2 more gym workouts.

After two more days at the gym, I went on vacation and work my Hot Pants running in Florida. I really liked them for running. My legs felt strong and well supported. These pants did not feel like they were slipping down like some can. After a few runs, I felt like the cellulite on my thighs was getting a bit better, which was a bonus since I was obviously wearing a swimsuit quite a bit at the beach too. Now that I am back in New England, I’d like to give them a few more weeks to see if I get even better results. I ran outdoors in the colder weather for the first time this season and the Hot Pants felt great to keep my legs warm (and they were still drenched in sweat after). Have your tried Zaggora? What do you think?